As we reflect back on a tumultuous 2022 and begin to look forward to 2023 we are not only preparing for our new year outlook but also what topics are on everyone's minds, including our own, over the holidays. We have listed the notable questions and what our take is on each one, both a short answer and a more nuanced view. So if the economy comes up in those lively holiday conversations hopefully these provide some interesting discussion material.

Long Answer:  Although two quarters of falling GDP meets the definition of a “technical recession”, from an economic perspective weakness has to broaden out to a wider range before it meets the criteria for an official recession. The National Bureau of economic research (NBER) makes the official call on whether the economy is in a recession. To do this they use 6 economic indicators which are more expansive than just GDP which can be impacted by large swings in trade and inventory data (which we have seen this year).

Technical recessions typically overlap with NBER-defined recessions but the timeline can be messy. All 6 indicators used by the NBER were still expanding in the first 3 quarters of 2022 making it unlikely for the US to enter a NBER-defined recession in the first half of 2022 which in combination with an inflationary environment allowing companies to raise prices, could be push an earnings recession out several quarters. But what’s important is that economic momentum has clearly been lost. 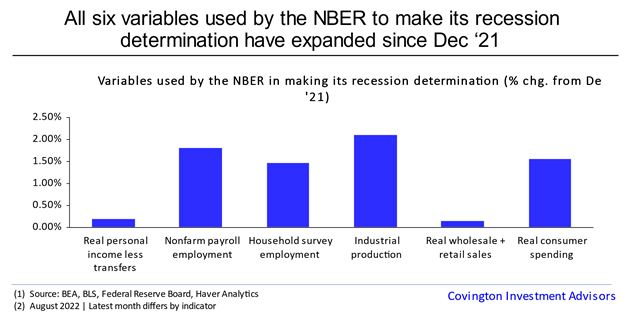 2. “So when will the next recession be?”

Long answer:One of the big imbalances currently taking place in the economy is that although GDP is stagnant, the labor market remains very strong. This combination of falling GDP and rising employment means a drop in productivity which will eventually be remedied by market forces. Once the unemployment rate begins to rise that will likely be the tipping point for the US economy to go into a recession. Consumer spending has also been surprisingly resilient but that is attributed to residual covid stimulus and the healthy job market.  When consumer spending and the labor market start to weaken is when the US will probably enter into a mild recession next year.

Supporting this timeline is the most sensitive areas of the economy to central bank tightening which are housing and auto sales. These two areas of the economy (and perhaps manufacturing) have already begun to materially weaken which should eventually translate into job losses and a weakening consumer with a “long and variable lag”. Once this domino effect works through the economy you will see a lot of the damage from this year's Fed tightening finally show up. 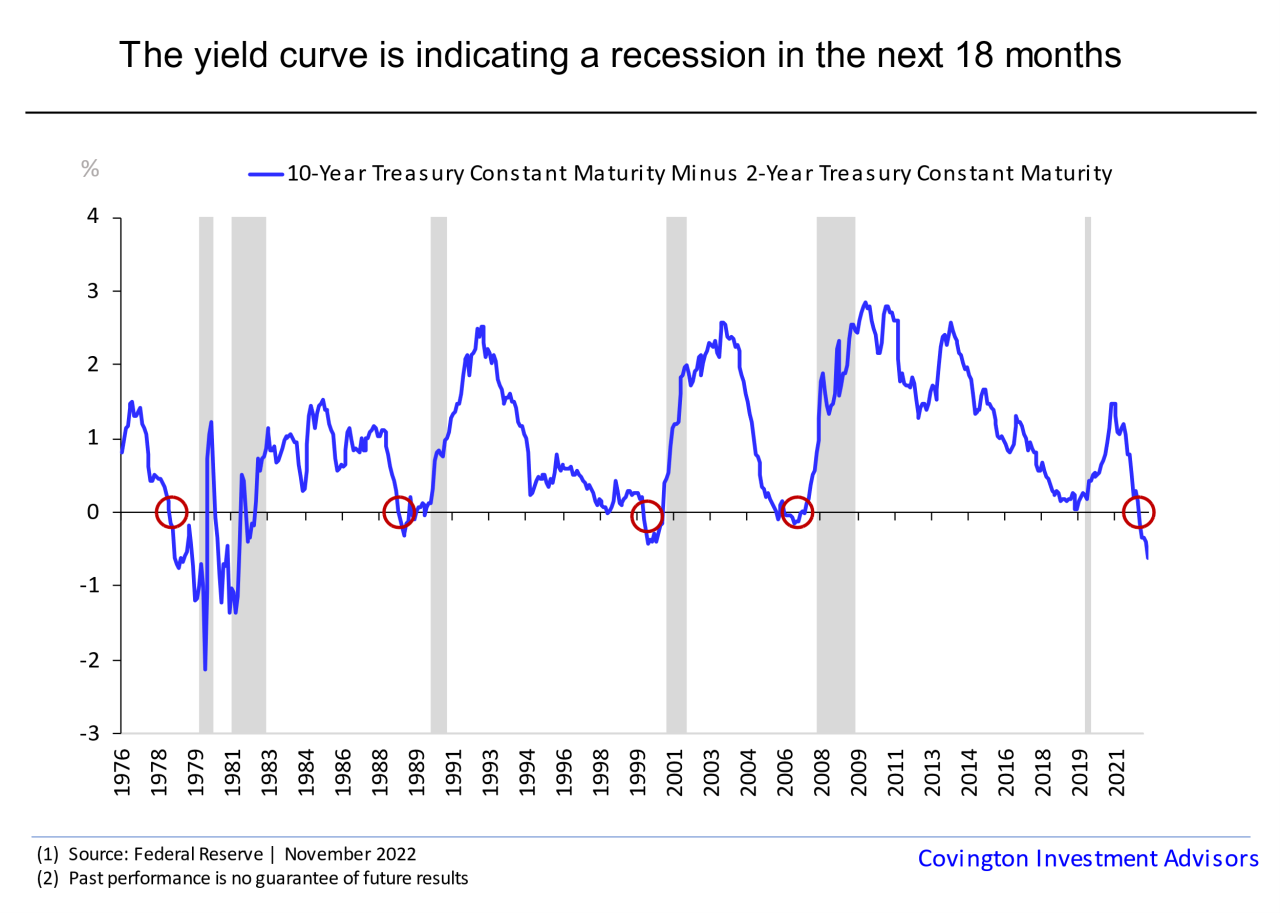 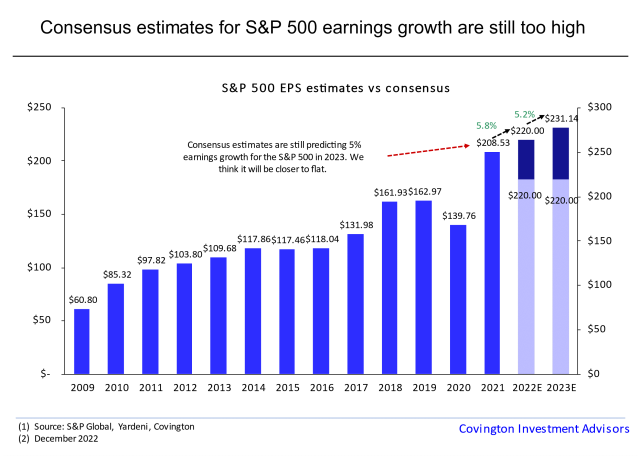 3. “When will the Federal Reserve finish raising interest rates?”

Long Answer:May of 2023 is when the futures market is predicting the Fed to reach their peak fed funds rate of 5% and then begin to slowly loosen policy. The fed funds rate is currently at 3.75% to 4.00%... But the truth is I don't think anyone, even Fed chairman Jay Powell, really knows when they will stop raising interest rates. There is plenty of economic literature and Nobel Prizes given out for theoretic central bank policy, but in practice what usually happens is central banks just keep raising interest rates until something “breaks” in the economy and they are forced to reverse course. The things that usually “break” are the speculative, illiquid pockets of the markets and you may already see this happening in the crypto/meme/SPAC/NFT/unprofitable technology investments.

Furthermore, this cycle you have high inflation caused in large part by trillions of dollars in helicopter money passed out by the government. This inflation has proved to be stickier than past episodes and the Fed will keep raising interest rates until they get it to their 2% inflation target. 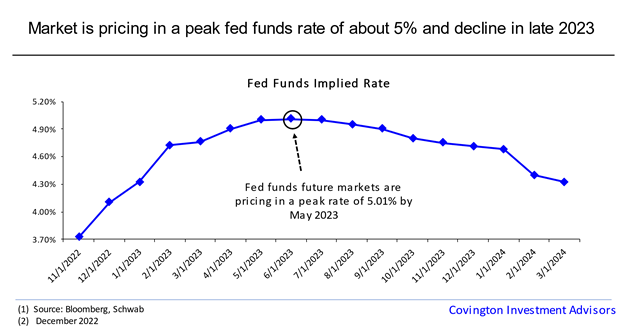 4. “Is there still a possibility that we avoid a recession and achieve a ‘Soft Landing’?”

Short Answer: A soft landing is still a possibility but at this point it is more than likely that we will at least have a mild recession in the next 12 months.

Long Answer:The persistence of inflation has surprised many, including us, and although it has shown signs of peaking it remains too high for the Fed to begin easing monetary policy. The longer inflation remains elevated the more central banks will need to tighten policy to choke off investment, and thus the higher the probability of inducing a recession.

Additionally, for the US to avoid a recession after much of the world is already tipping into one would be very difficult. The counter argument for this would be that Europe and China could be emerging from weakness very soon and thus act as a boost to offset impending weakness, but that is a very optimistic view. Avoiding a recession at this point after the aggressive central bank tightening, hangover from covid stimulus, and international market weakness, would be unprecedented in my view. 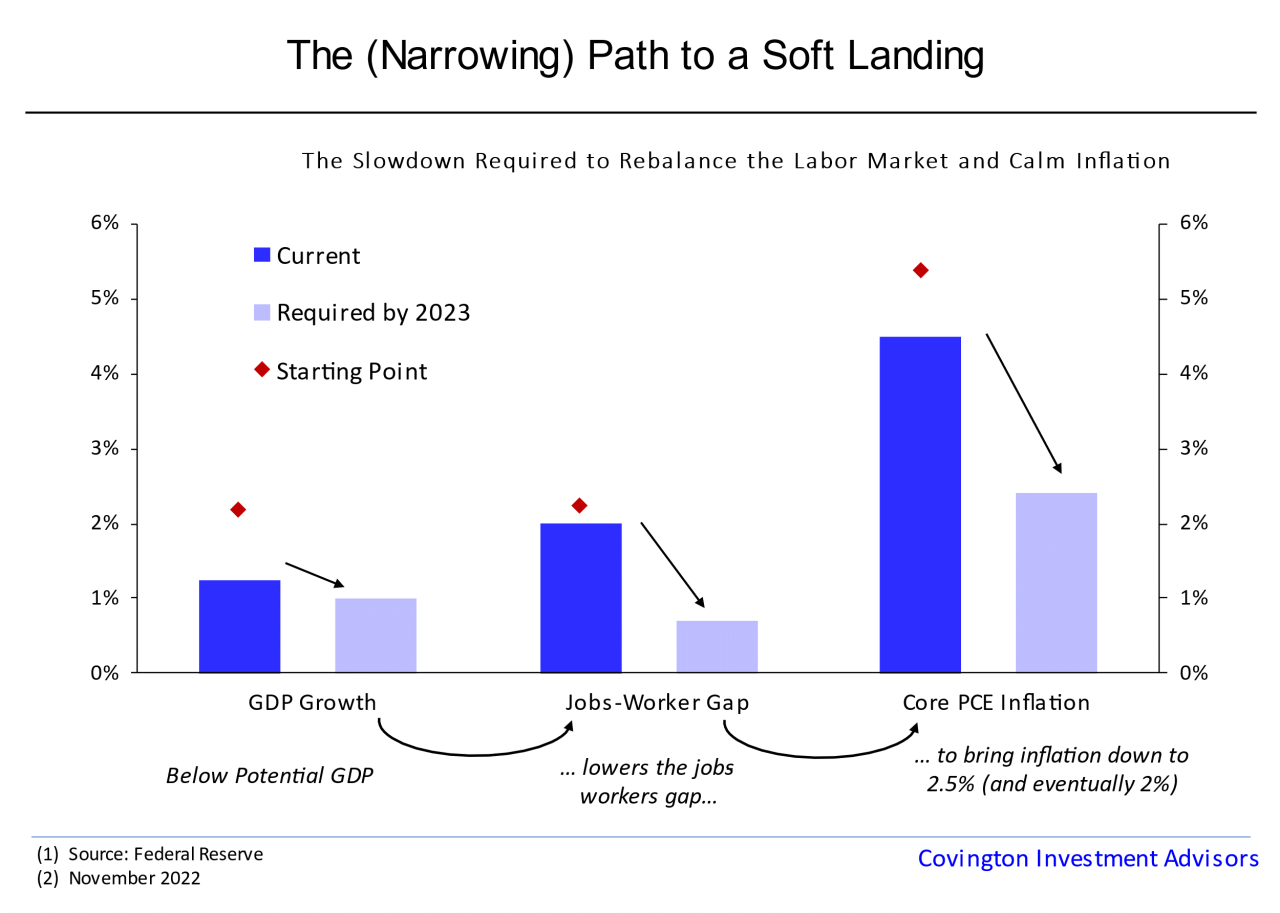 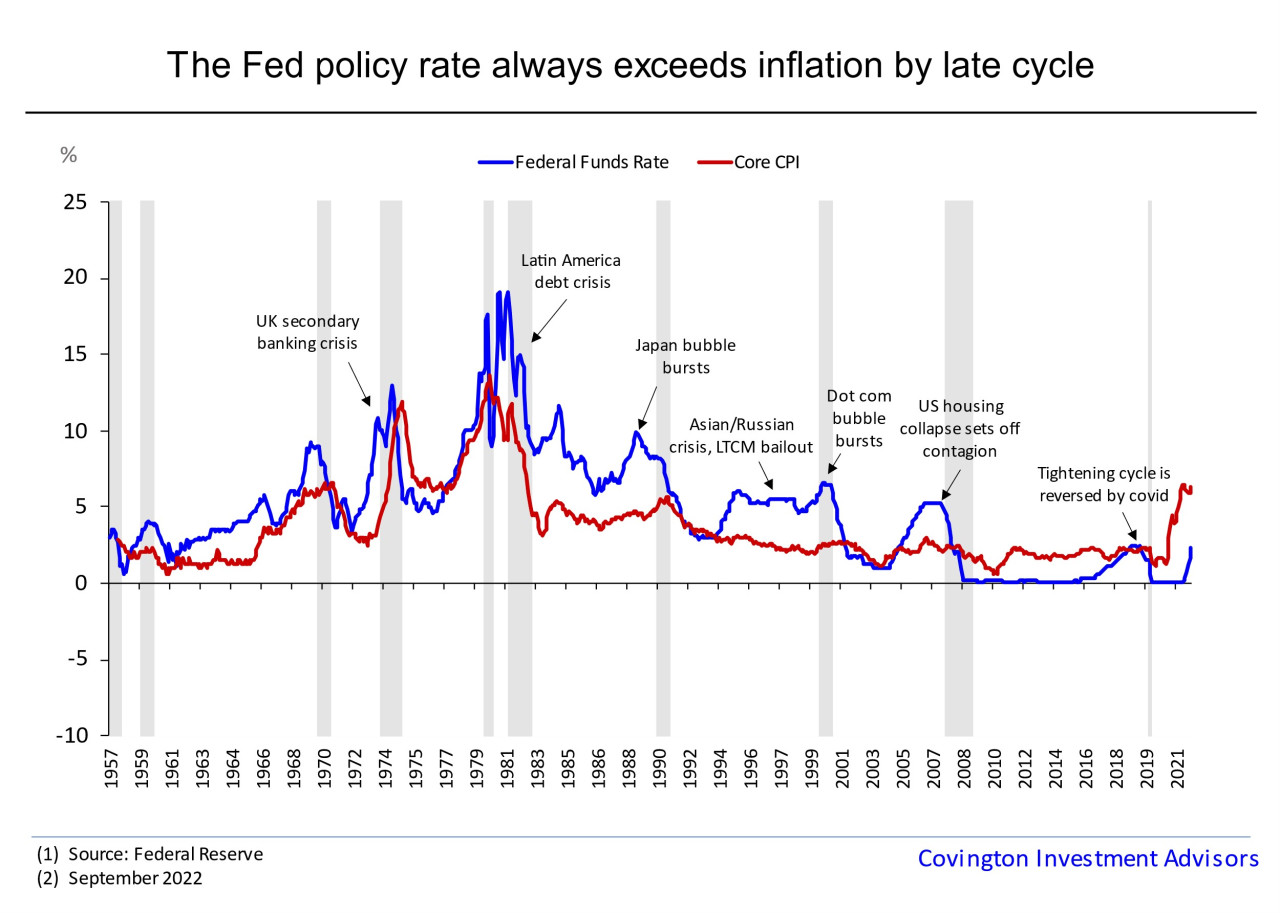 Long answer:Crypto may be the most exciting topic in this list and make for the liveliest debates over the holidays, but we have done our best to ignore crypto as much as possible and stick to our core investment process of owning proven enterprises that produce real cash flow (even if they don’t have the flair that crypto does).

I did write a piece in late 2020 for our 2021 economic outlook about crypto and what our concerns were with it and why we don't believe in its fundamentals as an investment vehicle. Now, for a while I did look foolish as the price kept skyrocketing and from looking at social media you thought by now we would be purchasing your morning cup of coffee with dogecoin. We have been largely vindicated this year as bitcoin has fallen 70% and many of the alternative crypto infrastructure has ended up going bankrupt. FTX, which was one of the largest exchanges and issued their own coin called ‘FTT’ has gone bankrupt and that may only be the beginning.

Our piece on crypto can be found in the last part of our 2021 Economic Outlook and our sentiment has not changed. 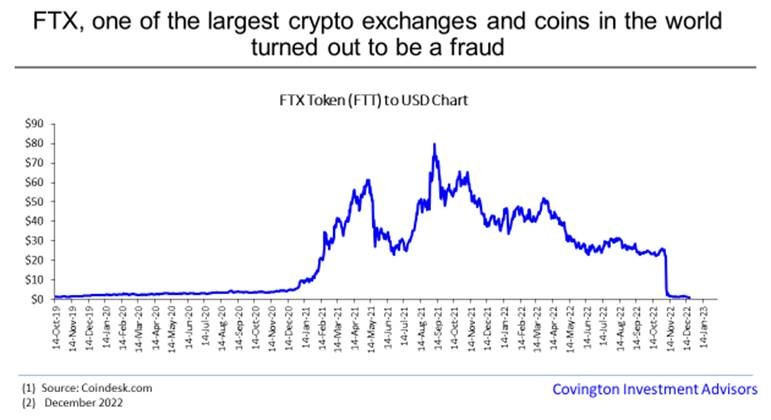 6. “If there is going to be a recession should I sell all of my investments and then buy them back later at a lower price”

Short answer:No, trying to consistently time the market is almost always an unwise decision. Letting time and compound interest do their work is the best approach to long term investing.

Long Answer:High quality equity investments are meant to have a long time horizon and be held through both economic strength and weakness. This does not mean that their equity prices will not go through drawdowns, but that the underlying business has the ability to come out stronger on the other side.

Selling out at the top and buying back in at the bottom sounds like an easy plan in theory but in practice is much more difficult as the strongest days in the market tend to occur at the depths of market drawdowns. Missing just one or two of these days can have devastating results on the compounding of capital. The probability of losing money on stocks over a one day period is a little worse than a coin flip (46%), but the probability declines to just 6% over a 10-year window since 1929. In fact, negative 10 year returns are very rare. Outside of the 1930s, the 2000s were the only decade with negative total returns.

Furthermore, the equity markets bottom before the economy turns up meaning that stocks will price in a recovery sometimes before the destruction even takes place. This makes jumping in and out very perilous. You will see plenty of investors boasting that they sold out at the top but if you look into their record many end up also missing the bottom and their long term returns converge, or even lag, the overall market.

A staple of a high quality equity portfolio are companies that are able to return capital back to shareholders. This is done primarily through dividends and share buybacks. The dividend income provided by portfolios helps to provide cash flow through weakness and strong companies take the opportunity to buy back their stock at attractive prices.

Our pieces on this topic can be found here. 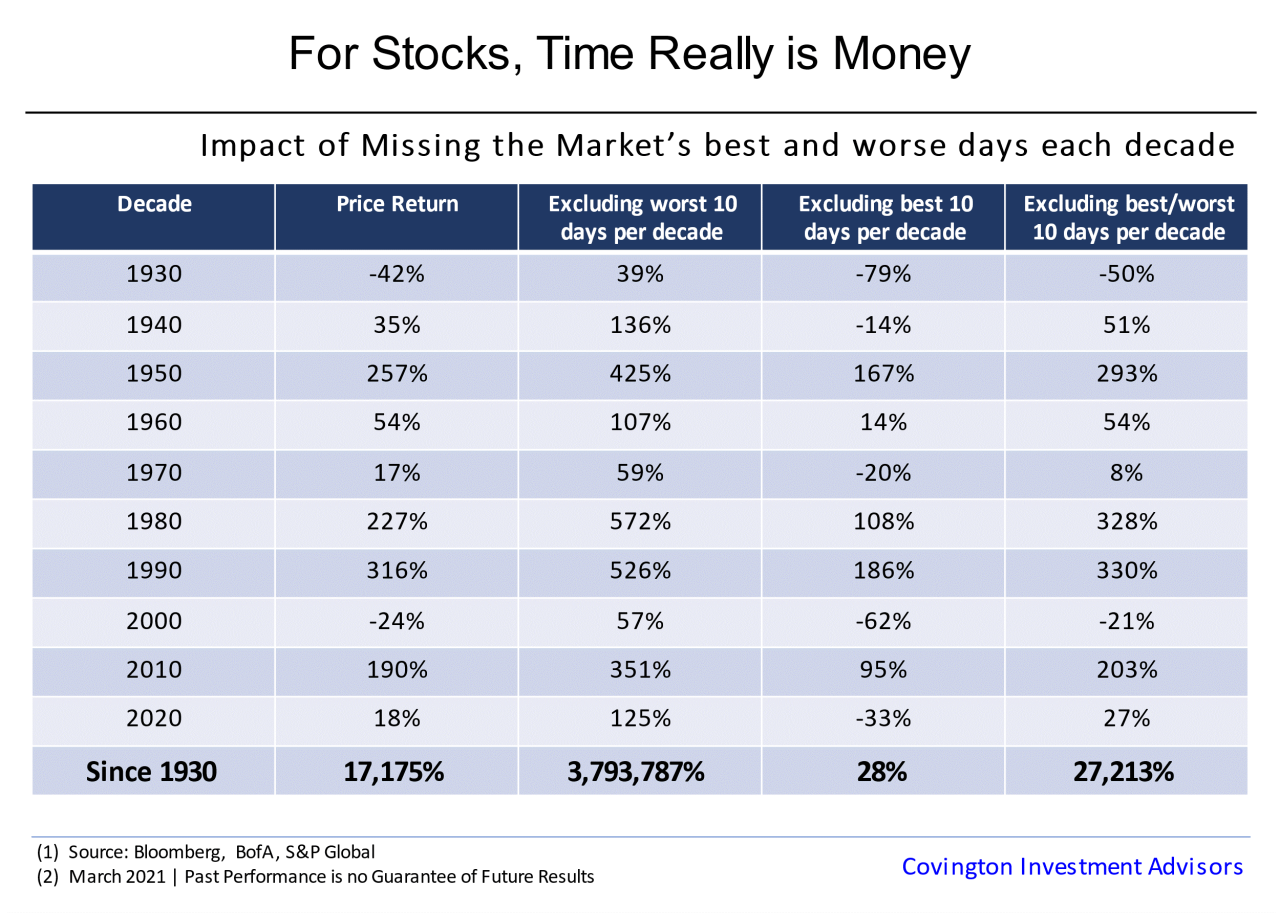 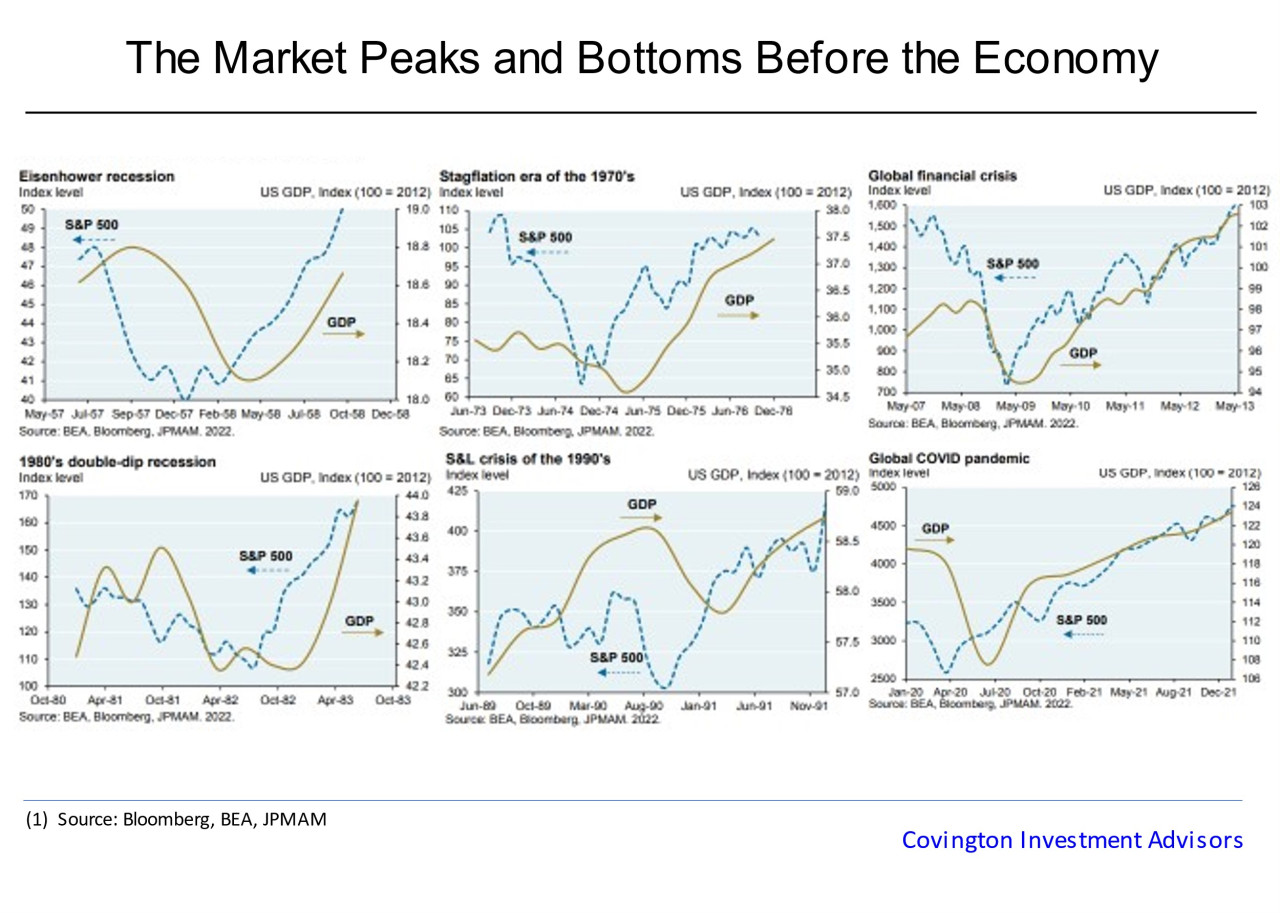 I hope these not only help answer some of your questions but also perhaps provide some color for those holiday economic conversations. We hope you all have a Merry Christmas and look forward to seeing you in 2023.